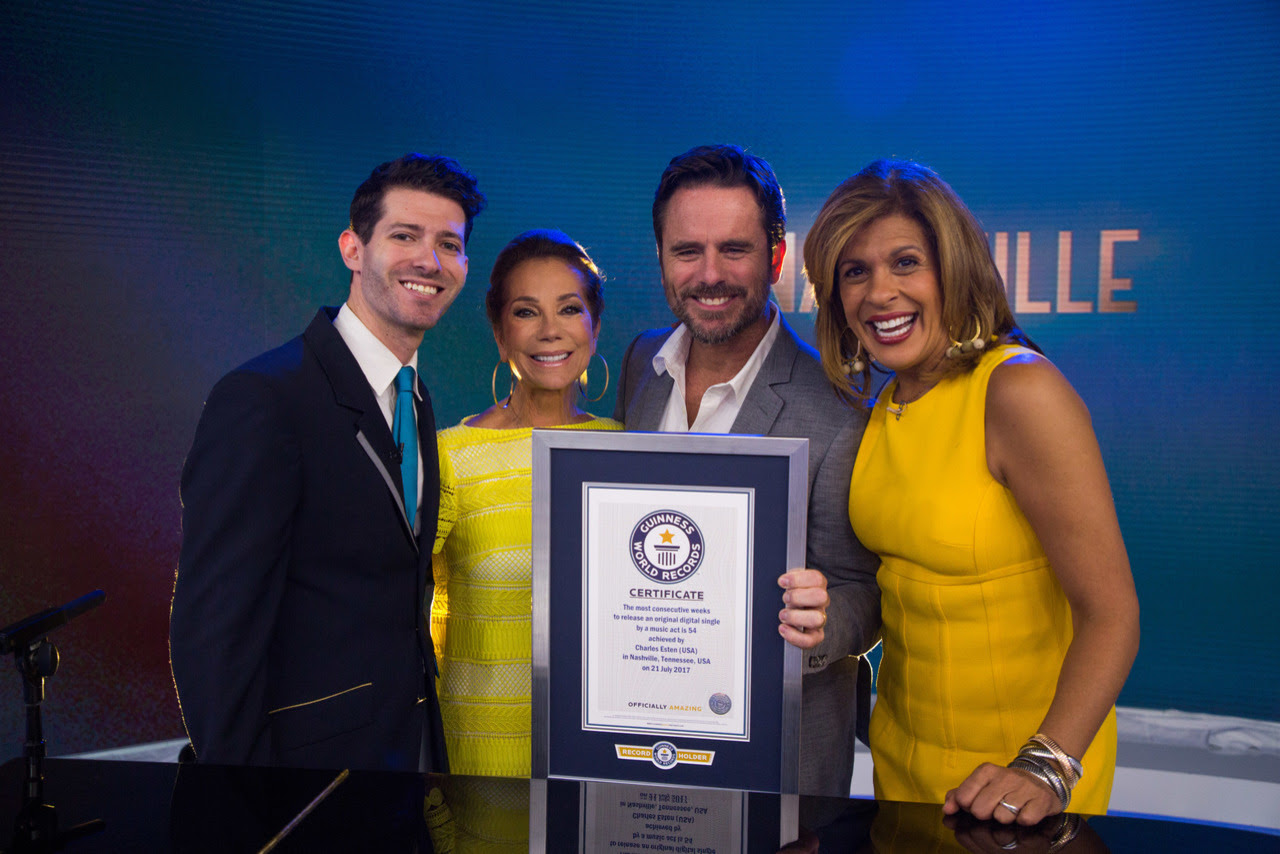 Following his performance of “Halfway Home” this morning on NBC’s TODAY, Charles Esten was presented a certificate for the GUINNESS WORLD RECORDS title for the Most consecutive weeks to release an original digital single by a music act.

The GUINNESS WORLD RECORDS title reflects his #EverySingleFriday campaign which started July 15, 2016 and ended on July 21, 2017. The campaign yielded 54 original songs that Charles wrote (or co-wrote), recorded, and released every single Friday since the campaign began.

Charles said, “On July 1, 2016, I posted a video where I promised to put out a brand-new original single every single Friday for ‘as long as it made sense.’ At that time, I had no idea how it would go, or how long I could do it. I only knew that, as a lifelong songwriter, through my role as Deacon Claybourne on ‘Nashville’, I had found my way to Music City and, surrounded by some of the most talented people in the world, I was feeling a level of inspiration and creativity that needed a different kind of outlet than an EP or an album. I had no idea how challenging this project would be, or how incredibly fulfilling, or that a little over a year later, I would complete #EverySingleFriday with 54 original singles released. I certainly had NO idea that number would be considered a GUINNESS WORLD RECORDS title.”

“While growing up in Northern Virginia, I (like everyone else I knew) was more than a little obsessed with the fascinating and inspiring GUINNESS WORLD RECORDS edition of amazing benchmarks. Right now, It’s almost impossible for me to imagine that my #EverySingleFriday project, a true passion project that started with the most humble of goals — to share my music — has earned a GUINNESS WORLD RECORDS title. I am deeply honored and extremely grateful.”

“Halfway Home” — the song he performed this morning on NBC’s TODAY — was #29 of the 54 songs in his #EverySingleFriday series. All songs are available at iTunes, Spotify and Pandora and on physical CD via CharlesEsten.com.

This GUINNESS WORLD RECORDS title comes on the heels of Charles’ 100th performance on the Grand Ole Opry last Friday night, July 20. Tonight he performs at New York City’s “City Winery,” and tomorrow he plays "City Winery” in Boston. Both shows are SOLD OUT.

His Boston concert takes place at approximately the same time as the airing of the CMT series finale of “Nashville” (8pm/ET). In honor of the occasion, Charles plans to pause his concert, tune in to CMT and watch the final season’s final episode, with friends and fans.

Charles will continue to tour, write and record while he also travels to New Orleans to film a new, recurring role on TNT’s, “Tell Me Your Secrets.”